Touring the Khumbu & the ascent of Pokalde

After nearly 3 weeks touring the Khumbu we finally arrived at Everest Base Camp yesterday in rather snowy conditions. The acclimatisation schedule seems to have worked a treat and everyone has had a great 1st night. Today has been a day of unpacking bags and boxes and discovering what we all sent out in the freight nearly 8 weeks ago – our Base Camp equivalent of an Easter egg hunt. Talking of which, we had mini easter eggs and chocolate selection boxes (Hello Kitty for the girls and Toy Story for the boys – which had all travelled better than expected).

The ascent of Pokalde a few days ago was a great success and everyone reached the summit in under 2 hours from the Kongma La. It was nice to have great views and be able to chill at just over 5,800m for ages taking in the panorama. Back down at the Kongma La camp (around 5,450m) Jen’s artistic flair came to light when she decided to stamp out ‘The Big E 2011’ in 20 foot long letters on the frozen lake. Personally I would have preferred ‘elmtreelodge-keswick.co.uk – vacancies available but book early to avoid disappointment’ – but it would perhaps have taken up too much space.

EBC is quite a sprawling area and from the first tents we had to keep going for another 20 mins or so before we got to our camp. The whole site is an amazing area on a rubble covered glacier with another pristine glacier dropping down from the Western Cwm. Tomorrow we’ll be venturing in to the Khumbu Icefall – which apparently is in great condition this year with the widest span across a crevasse being 3 ladders connected together.

The following day our intention is to pop up to Camp 1 (around 6,000m). When I say ‘pop up’ – it could take anywhere between 3 and 8 hours depending on how quickly folk can move in the increasingly rarefied atmosphere, how everyone takes to the ladder crossings and how much traffic there is. To put it in to perspective the Sherps tend to go to C1 in around 2 hours!

So we’ll be off the air for a few days but hopefully will have some photos to send soon. We’ll try and keep you all updated as much as possible but when it comes to summit push time we may go quiet for a while. Partly because we’ll be on the hill (!) but also because we are aware that there are other teams out there who are following our progress (and therefore our weather forecasting as well). It would be somewhat silly on our part to shout from the tree tops (tent tops?) about our summit attempt to only find that it then made for a congested few days.
That’s about all for now … Tim and Co

You can follow our progress at
www.thebige2011.co.uk
When you are there if you subscribe you’ll
automatically get updates – hot off the press.

snippets from the txts

Firstly if you are with O2 and trying to get your texts to the Everest Team – Give up now… You’ll need to borrow a phone using a different service provider (don’t forget to start your text with “To [name of person or persons sending to]”)
Here are some of the text based updates from the gang:

Team at Gorak Shep for tea and biccies, then off to Everest Base Camp (EBC), our home for the next 5 weeks. Let the fun begin!

Trekked through Scottish Winter Conditions Yesterday. Gloriously sunny this morning (at the moment but clouds are building!) Off to Sleep at 5,300m

Had a great night at 5,450m. Having a second night then we’ll be at EBC on the 23rd. Then the real work begins!

Arrived at EBC in fine fettle! Snowing at the moment and apparently set in for the next 4 days.

Been rumbled. Kenton trekked to EBC in 4 days. Therefore it goes without saying we’ve just had two weeks on a beach.

A group who look barely capable of trekking to EBC have turned up. Turns out they are the Nepalese Civil Service Everest Team. OMG!

Word on the grapevine is The Khumbu Icefall is in this year. We’ll go have a look in a day or two.

SUMMIT SUCESS!!….
…On Pokalde (a tad over 5,800m) Great views all round. Heading back to Kongma La for second night.

That’s all for now folks. I’ll keep posting to the blog as news comes in. apologies if the texts appear in the wrong order (it’s how they come through and let’s not forget where they’re coming from)

Just leaving Dingboche and that’s our last teahouse for the next 5 or 6 weeks. Team on top form and we’re all itching to get to EBC.

Trekking to Dingogma where there is a beautiful grassy camping spot and then on up to around 5,100m tomorrow to camp at the Kongma La. Temperature dropping to around -10 to -15 at night which is good training for the even lower temps we’ll be experiencing at Camp 1 and Camp 2 on Everets where it will probably be down to -20 or lower.

We’re all pretty well acclimatised now and our O2 sats are around 90 to 95%. At sea level you’d expect 98 to 99% O2 and if you went to hospital with some of the readings we’ve been getting over the last 2 weeks you’d be a very poorly patient and on oxygen immediately. Typicall, for a lot of the team, our sats dropped to 80 to 85% (Bruce managed a lowly 75%) and although we are now back in to the 90s we’re going to be going higher soon and the sats will undoubtedly drop accordingly.

We’ll be arriving at EBC in 5 days and then after a couple of days sorting our gear and moving in we’ll start exploring the Khumbu Icefall. We’ve heard that the ropes have been fixed to C2 (that was last week so probably further by now) and Camp 2 is being established so it’s all very positive.

All we need to do now is get acclimatised to above 6,500m, spend many uncomfortable nights in various tents on the hill in desperately cold conditions with frost coating the inside of the tents, keep fit and healthy, stay hydrated, get all our kit and equipment to the right places on the hill, stay safe and wait for the weather window. Easy as pie!

Well what started out as a nice morning has rapidly deteriorated to an awful afternoon. The clouds bubbled up and quickly filled the valley to then make it reasonably dark in Dingboche – so much so that we had difficulty seeing the cards and dice in the bakery!

And now it’s thundering as well. Thankfully we are on a well earned rest day and so are staying put – but I do feel for all those trekkers who are now in the middle of their hike to their next destination. Particularly if they were hoping for views.

We’re off tomorrow to a great little camp at a grassy meadow on the way to the Kongma La and then 2 nights camping just below the col with some of the best views in The Khumbu looking across to Baruntse and Makalu. We’ll pop up Pokalde and then make our way to EBC.

Don’t forget that you can e mail any of the group at firstname@thebige2011.co.uk (abi, chris, giles, jen, partha, susan, tim).

Conditions are soon going to be getting colder and we’ll be living higher – which is quite a stressful and arduous environment. Added to that the fact that everything is going to be getting much more serious and suddenly messages are even more welcome than usual and are a real morale booster.

So that’s all for now and possibly for the next few days.

Cheers for now – Tim and the team.

Just got a few updates from the satphone for the previous few days.

It’s a glorious sunny day & we’re heading to the lakes below the Renjo La. Only seen 2 westerners in the last 4 days. Awesome.

Played boules last night by the Renjo lake – a great setting. Everyone in fine fettle & ready for the Renjo La & down to Gokyo.

A superb day over the Renjo La, then prawn crackers & soup for lunch in Gokyo. It’s time for a pits & bits wash. All fit & well

A longish day up to Nobby’s View – about 5,500m. Unfortunately there wasn’t a view to be had so we’re asking for a partial refund.

Since then we have been over the Cho La pass and are now based at Dingboche for a couple of rest days. It’s changed a little bit here – there are 3 internet cafes and a bakery. Needless to say that our first stop was the bakery. Having a rest day tomorrow so it’s going to be showers and washing water all round – as well as a bit of time filling up on chocolate doughnuts and coffee.

Not a great deal to update re the team except to say, yet again, that everyone is very well and the acclimatisation schedule seems to be working wonders. Slept the night before last at 5,050m and not a headache in sight – which is exactly what we were hoping for. After Dingboche we are taking in a couple of high camps at the Renjo La (circa 5,200m) and we’re going to have a pootle up Pokalde (just a tad over 5,800m). After that we’re heading for Base Camp. After a couple of days sorting gear and getting acquainted with our new surroundings things will then take on a slightly different perspective when we start getting to know the route through the Khumbu Icefall and start spending nights at Camp 1 (6,000m) and Camp 2 (6,400m).

Hopefully our 3 week trek will see us fit enough and well enough acclimatised to be moving quickly (in Himalayan terms) and efficiently up and down the lower slopes of The Big E.

In the meantime I’ll leave you with last night’s anecdote. It was almost a full moon and we were out taking night time shots from Dzongla of Ama Dablam. Bruce just couldn’t seem to get his camera to cooperate. 15 second exposure – nothing. 15 second exposure with a wider aperture – nothing. Manual override for all settings including the focus – longer exposure and wider aperture. Still nothing. Then there was the realisation that he still had the lens cap on! Doh! 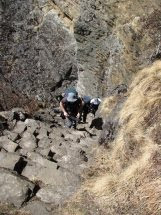 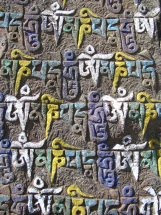 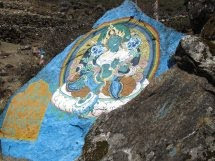 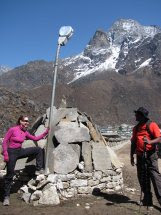